Tales from the Fisherman

The Art of Fly Tying 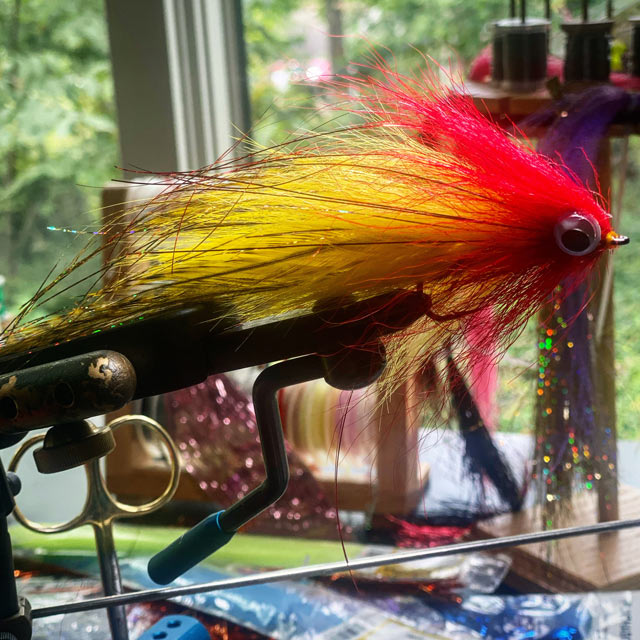 Fly tying has been an amazing and fascinating path in the evolution of my fly fishing career and is truly an art.  I always wanted to learn to tie flies but stayed away from it because I was just too intimidated by the process, however, a few years ago I decided to jump into it head first.  I bought books, DVD’s, and spent countless hours watching experts on YouTube.  I watched everything from tiny dry flies, nymphs, massive streamers and everything in between.  I wanted to learn it all but I began by just watching and reading.  I especially credit Kelly Gallop, Josh Varner, and Gunnar Brammer for my work with streamers but also countless other tiers for their help with a variety of other flies.  If I recall, I spent about a year just trying to get a sense of it until I decided I wanted to take it on as a hobby.

The first fly I tied was a black wooly bugger, which is a common fly for beginners since it uses many basic principles of tying.  I remember being so nervous to screw it up and wasting time and materials but after several attempts and trying to learn thread control with the bobbin, I realized that the mistakes are all part of the process and it’s the process that determines the outcome.  I found myself intrigued by the process of starting with a hook, thread, and some materials and finishing with my own fly that will catch fish.  It’s so cool to go from raw materials to seeing the fly in the fish’s mouth.  In fact, when I get photographs or videos of my fish, I usually try to capture the fly as well since this reminds me of the tying process.

There is also an element to tying flies that allows me to get lost in the moment.  I know it’s the combination of concentration, creativity and repetitive movement but it’s especially satisfying when my plan for the fly comes to fruition on that final whip finish of the head and I snip the thread and hold the fly in my hand for the first time.  I will usually tie several of the same flies at one sitting since I already have the materials out and readily available so this becomes a similar experience as casting a fly rod.  Time seems to pass so quickly and all I think about is creating this fly from nothing.  It’s fascinating for me to think that a hook, thread, and feathers are all independent materials from each other, however, when combined with skill and imagination, a fly develops right in front of my eyes.  I find myself getting into a zone of concentration similar to the “flow” I described in my other blog.  The art of fly tying is unlimited and that too, allows my imagination to create anything I think a fish will eat. The thought of creating an imitation of a bug, crayfish, or a baitfish that will trick a fish into eating it keeps me coming back to the vise and this is the art of fly tying.